How Asia’s cleanest village in Nagaland is now an inspiring model on eco-conservation? Khonoma, a sleepy village, located 20 kms from Kohima, has become a well-known model for community-based conservation in the mountains. Based in the lush and green hills of Nagaland, Khonoma became famous when it was declared as India’s first green village in 2015. Along with the title, Tourism Ministry also bestowed this pristine village with a grant of Rs. 30 million to develop the village infrastructure. Since then, the ecological ethics and values of the village has only grown by leaps and bounds.

However, the village has also not been spared by the devastating effects of the COVID-19 crisis that has claimed millions of lives globally. It was on March 13 that the district authorities of Kohima announced a blanket ban on all kind of tourism activities. As a result, Khonoma was left to manage the aftermath caused by a sudden drop in tourism and allied activities.

As per World Tourism Organization (UNWTO) the international tourism could decline by 60 to 80 per cent in 2020 due to the ongoing pandemic and resulting in the revenue loss of $ 910 billion to $ 1.2 trillion. Not to mention, it will also place millions of livelihoods at risk.

Khonoma, a 700 years old village, has a rich history which made it recognized, nationally and worldwide. The conservation efforts undertaken by the local communities made it to global headlines, making experts curious to know more about the model. Spread over an area of 123 sq.km., the village harbors almost 3000 people in 600 households. The Angami men of Khonoma, a native warrior tribe of Nagaland, stood valiantly and fought against the British invasion to the village. Every year, 1 September is celebrated as the birthday of the village.

As per several ecological studies in the region – 84 kinds of wild fruits, nine types of mushrooms and over 70 medicinal plant varieties were found in the village and the surrounding area. 19 types of bamboos and more than 200 types of plants were also located in the village. 25 types of snakes, six kinds of lizards around 200 kinds of bird species have been identified by the local villagers. Tiger, leopard and sloth bear have also marked their presence in the village. Nagaland’s state bird, which is now endangered – Tragopan – was reported to be found here. However, the bird stands nationally endangered now.

How did the journey of conservation begin?

Year 1993 was a turning point in the history of Khonoma. The Naga tribes are well known for their hunting activities. In 1993, 300 Tragopans were hunted down for their meat by the native tribes in the village. The incident didn’t well with some ecologically sensitive group of villagers, as a result, they started the debate on hunting with other groups. In this initiative, two people from the village showed the way. Tsilie Sakhrie, a local contractor with the forest department and T. Angami, a forest officer.  They both agreed on the idea to have a protected area around the village. As a result of which the Khonoma Village Council declared its intent to notify around 2000 ha as Khonoma Nature Conservation and Tragopan Sanctuary (KNCTS). It took a long time to convince the villagers to give up on hunting practices, as they were integral part of their culture. But, at last, tribes agreed to conserve the environment.

In December 1998, the foundation stone for the sanctuary was laid and villagers agreed to ban hunting not just in the sanctuary area but also in the entire village area.

For a decade now, the Angamis tribe of Nagaland and inhabitants of Khonoma, have developed some of the most well-managed, transparent and efficient environmental management practices. They have established mechanisms on resource management, conflict resolution, village development and forest conservation. All of this has yielded positive and long-term impacts for the local communities of Khonoma. The hill terraces are practicing sustainable agriculture today and produce almost 40 types of paddy at different elevations. Youngsters are trained to carry out surveillance in the forest which ensures that no hunting or other illegal activities take place. 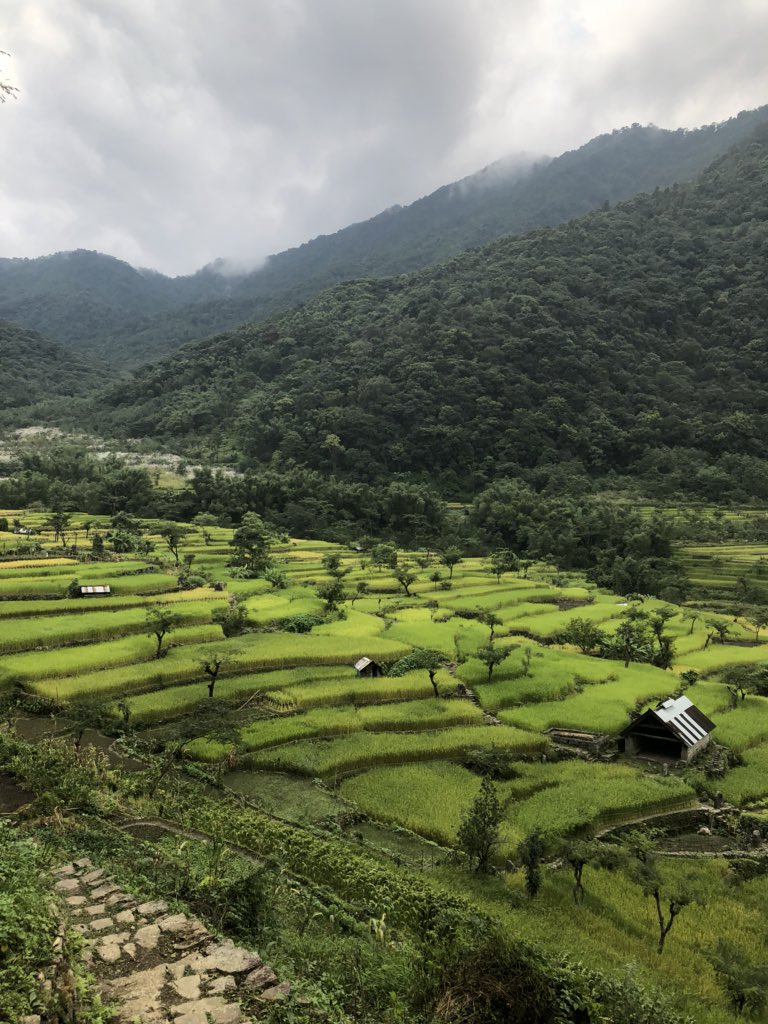 Tourism and pandemic in Khonoma

In 2019, Khonoma received more than 4,000 visitors. One fifth of them are foreign tourists, attracted by rich flora and fauna of the village. The visit of tourists led to the opening of a few homestays in the village. As per the report by The Guardian, today the village has around 12 homestays and before lockdown, 20 were working as guides. The eco-based tourism model benefitted large number of families in the village.

However, now with lockdown in place, tourist activities have come to a halt. But, guess what, this is not worrying the villagers. Why?

The terrace paddy farms make the entire village population self-dependent. Each and every drop of water is conserved. Vegetables are also bartered with neighboring villages. Traditional knowledge is being implemented to maintain trees and practice sustainable agriculture. It is said that some of the trees in the village are more than 200 years old!

Villagers remain hopeful that once the lockdown is lifted people will start visiting the sanctuary. Till then, they continue to invest their time and energy in practicing agriculture and rearing livestock, thereby making themselves self-dependent.

One of the major takeaways from the inspiring story of Khonoma is the faith of villagers on nature. They ventured into tourism for sustaining their livelihoods but didn’t give up on agriculture and conservation that will sustain them and their future generations!

(with inputs from Gautam Kumar)

Author is the Lead – Public Policy and Communications at SDC Foundation. He tweets at @Writer_Rishabh.